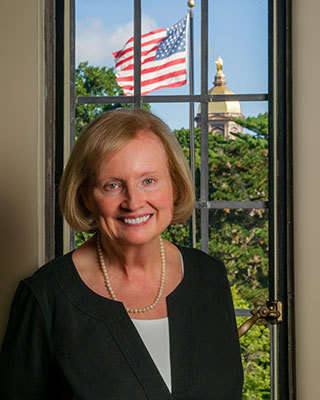 All politics aside for a minute, SJND is very proud of Patricia O’Hara ‘67 who introduced Supreme Court Nominee Judge Amy Coney Barrett to the United States Senate Judiciary Committee.

As former Dean of the law School at the University of Notre Dame, Patty was a friend and mentor to Judge Barrett. It was inspiring to see an alumnae from the 1960’s address the US Senate Judiciary Committee and we all wonder what the nuns would be saying!

Patricia O'Hara said it best,” When I was elected Sophomore Class President, Sister Gerard Marie met with me as the Principal.  She spent the first part of the meeting teaching me how to shake hands firmly because she said it was a skill I would need later in life. How right she was! I could never have known at fifteen the blessings and opportunities that would be mine.”