From Finance to Films: Bill Victor Arucan, '82, on Reinventing Yourself 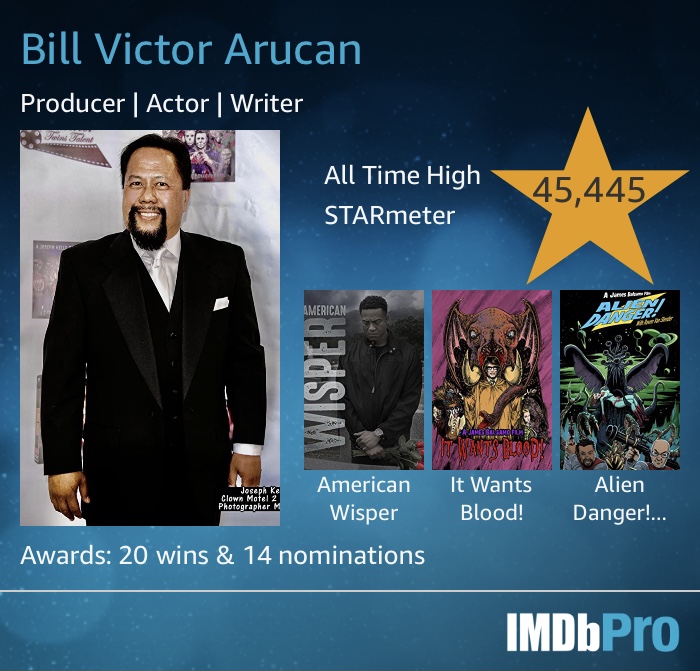 How does one go from political science studies at UC Berkeley to award winning film director and actor? For Bill Victor Arucan, ‘82, it started with a cosplay costume three years ago at the annual Star Trek convention in Las Vegas.

“I entered into the cosplay contest several times, but the last few years I won an award,” Bill Victor said. “That started getting the attention of actors and actresses and producers who said, ‘you know, we like what you're doing. We love your cosplay.’”

Bill Victor, equipped with the experience of a 24-year career in finance and business, used his networking skills (which, he later wrote, was as easy as making good connections and keeping in touch) to catapult himself into the film industry—in 2020, he signed on to over 25 film projects and to date has over 40 film and television credits to his name.

“I actually starred in a couple of Star Trek fan films with my friends,” he said of the beginning. “Then I got into some short films with Star Trek actors. From there, the relationships started again saying, ‘well, we loved you in this film. Let's get you in the next film.’”

One of those films ended up premiering at the TCL Chinese Theater on Hollywood Boulevard on July 26th. Bill Victor starred alongside Eric Roberts and Amy "Lita" Dumas in the political horror film It Wants Blood directed by James Balsamo.

“I had a captive audience of directors, actors, promoters, all on Zoom every single day,” he said. “We got to talk about scripts, movies. All of a sudden they started giving me ‘Well, when COVID lifts we’ll put you in this film, or we'll put you as a writer on this film.’ In 2020, I signed up for 25 to 40 films.”

Bill Victor is no stranger to seizing opportunity. His entrepreneurial spirit has taken him on a wild ride from the beginning. While at studying at UC Berkeley, he founded the investing club and, with the money he made trading stocks started a limousine business. That had its perks—like getting a ride to the library. He credits his acceptance at Berkeley to his experience at SJND.

Be brave, keep learning, experimenting, and trying new things. Ask for help. Leverage expertise. Get a mentor or tutor.

“[My geometry and history/civics teachers were] very integral in inspiring me and motivating me to keep pushing forward to get into a university,” said Bill Victor, who called himself an “average” student. “When I see them at my alumni reunions, I always thank them for really pushing me hard those  junior and senior years so I could boost my grades up and really get into a great school.”

While grades and school were important, Bill Victor also highlighted the community aspect of SJND as some of his fondest memories.

“Some really cool memories that I enjoyed were spirit week junior and senior year because we had so many great creative artists and people in my class and we became such great friends,” he remembered. “I was able to bond with so many different groups, like the rockers, the soul people, the nerds, the athletes. It was just so cool. I was the jumper so I made friends with every single person, every single group, so it was easy for me to go to all the different groups back then. I was on the tennis team. I played backgammon after school. I was a yearbook photographer. So there's so many great memories in the four years.”

After Cal, Bill Victor ended up, by some luck, he says, in a management training program at Franklin Templeton. It was there on rotation in the legal department working to Blue Sky mutual funds in each state that he realized he did not want to go into law. Bill Victor did, however, end up staying at the company where he worked for 24 years across many departments including technology, project management, and operations before retiring to care for his mother. And now, it’s a whole new story as he embarks on what he calls his encore career.

If anyone’s proof that you can always reinvent yourself, it’s Bill Victor. He wants students to know that above all, they should “be brave, keep learning, experimenting, and trying new things. Ask for help. Leverage expertise. Get a mentor or tutor.”

Who knows where you’ll end up if you do?