Making the Most of It: Valedictorian Remembers an Unconventional Year

It didn’t exactly happen that way for Rachel Bartley, SJND ‘’21, and her classmates. There was no prom (though a banquet will still take place), and everyone made do with a virtual spirit week on Zoom. 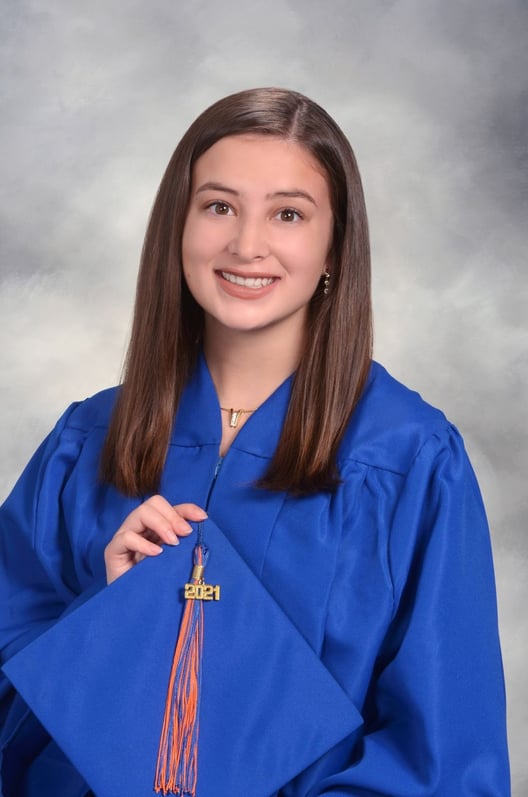 While the year was disappointing, it didn’t stop the SJND valedictorian from making the most of her time at the school. She found that though it didn’t go as planned, there was still room to learn and grow.

“Figuring out how I would manage my academic life now that my social life was completely cut off...it was kind of hard not being around my friends because they definitely help you stay on top of your schoolwork,” Rachel said. “When you're with your family the whole time, sometimes you can get a little frustrated that way, you're distracted that way that you wouldn't [be] if you were working by yourself, like normally after school.”

The snowman Rachel built with her siblings.

As time passed, Rachel began to find her own sense of independence. With social distancing now mandated, learning to do things solo was essential if she wanted to do something.

“I would say definitely over this period of time through the pandemic, I've learned to be more independent and do things on my own,” she said. “When you're all alone in your house but can't be connected to anyone, you have to learn to fill in the roles that your friends would have filled for you. And you have to learn how to do things on your own more and like sometimes the only way to get out of the house is to go for a walk by yourself but no one else in your family will go on a walk with you. So you have to learn how to take initiative and things like that.”

Rachel also kept busy as the president of the student government. Though online learning and the inability to gather together presented challenges, she was adamant about trying to give the SJND community the best experience possible.

“It was definitely a harder year online because a lot of student life is in person, close to each other, doing cheers and stuff like that,” she said. “Keeping students engaged and wanting to participate outside of class and school activities was definitely a challenge, but something that I was able to just keep pushing forward. [I also just tried] to show my school spirit so that other people could see that and be encouraged.”

During her time at SJND, Rachel, who is now bound for UCLA this fall, dipped her hand in every pot when it came to being involved on campus. But, from clubs to musicals, it was being a part of the student government and leadership that really stuck. It seemed to be a perfect compliment to her skill set and allowed her to develop leadership qualities while serving her community.

Rachel with her dad.

Now, as the class valedictorian, she will address her peers in a commencement speech. At SJND, students in the top 10% of the class are invited to write and audition a speech. Two are selection: One as valedictorian, the second as salutatorian. Rachel felt partially compelled to write one as her mother, an SJND alumna, also auditioned  when she was at the school.

“I feel like you should take that as an honor,” she said. “Show that you still have that drive in you and can present why these past four years you've worked so hard.”

As for her memories of the school, they’ll only be good things.

“Despite being very small, it has a lot more heart than you would see at a large school,” Rachel said. “You can see that [it’s a] close-knit community. [I’ll also remember] how we're taught to interact with each other. It goes to show that we're not just there for an education; we're there to build character and our own morals."