A Student Making a Difference with the MLK Freedom Center 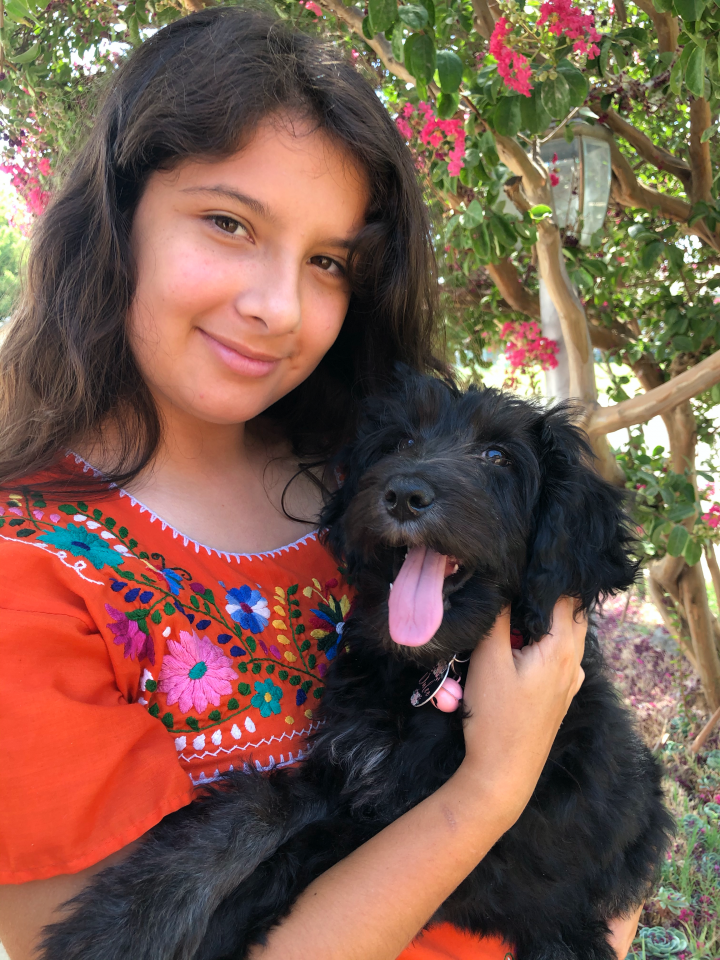 If you sit across from Kalilla Garcia (Grade 11) and ask her about her summer, her eyes will light up and she will take you on a journey. From protesting on the streets in Oakland to standing with a Quinault Indian Nation tribe leader on the protected tribal lands along the Washington State coast. But the journey that Kalilla is on is not just about the physical locations she has visited, she has been diving into issues that many of us wrestle with.
“Do I make my ancestors proud?”
“Do my actions matter?”
“How can I make the world more fair and equitable?”
“What am I grateful for?”
“What role do I play in society?”

These are all questions that Kalilla has faced this summer during the Martin Luther King Freedom Center’s, “To Us, You Matter Civic Engagement Summer” initiative. Kalilla joined the Freedom Center during ninth grade and says it has been a transformational experience for her. I sat down with her to learn more and in between cuddles with her new puppy, Dulce de Leche, she shared.

You and 17 other students got to go to Washington State with the Freedom Center this summer. What was that like?

On our first day, John Lewis passed away. I didn’t know very much about him but some of the students on my trip had been on the pilgrimage with him and they talked about how grateful they were to have met him. I learned a lot about his life and legacy. They told me about the chickens he used to preach to when he was a child and how he says “to make good trouble.” I learned about nonviolence as a lifestyle, not just a practice. It takes a lot of self-control and discipline.

While in Washington we got to meet a native tribe who taught us about the importance of our ancestors. Ancestors are especially important to the native tribes because they learn from them who they are. Titus Capoeman [Chair of the Quinault Indian Nation Cultural Committee, and MLK Freedom Center graduate], the tribe leader who spoke to us, hunts elk and he fed us elk burgers! Then he took us down to a beach that is property of the Quinault Indian Nation. It was so beautiful! It was obvious that the condition of the beach would not be what it was if they had not protected the land.

What is one of the focuses you had this year with the Freedom Center?
The election this year is very important for the future of our country. So we are focusing on getting people engaged. Don’t forget to do the census!

One of the assignments from the center I had was to focus on the culture of the Black Lives Matter protests. I went to a protest in Oakland organized by Oakland Tech students. It was really, really cool. In the 70s [protests] there were a lot of songs. Which we don't have this year. This year we have chants.

What is something you learned this year that really made you think or was kind of an ‘Aha’ moment?

There’s this quote from Martin Luther King Jr that basically says whatever job you choose for yourself, take up social justice as well.
When we heard that we were sitting there thinking, “How on earth can u take up social justice in every job? Being a lawyer or teacher it is easy to do that. But how the heck can a doctor do social justice?” And we started talking about different roles. As a doctor, you can work with people who are marginalized or don’t have money and make a huge difference. There was a student who wanted to be an engineer- maybe they can come with a way to disarm tear gas that gets shot into a crowd one day!

Whatever career you may choose for yourself – doctor, lawyer, teacher – let me propose an avocation to be pursued along with it. - Martin Luther King Jr.

So you think everyone can do social justice work?

Yes! Dr. King also talked about the three different types of power: Cultural/Spiritual, Economic, and Political power (this last one is kind of confusingly named. But basically it means who has the power to make the decisions for a group). So we worked on tracking down those different types of power. One example of economic power and political power is the military. It's kind of the opposite of spiritual power because you have to listen to/follow orders of your superiors. And then we looked at our family and who had the most power in our family structures.

More concretely I guess if I were to go get a cup of coffee, think of everything I’d need. The car I need to drive there. The people who work at the coffee shop. The people who made my credit card. The farmers who grew the beans. Dr. King has a quote about it too, in the 60s he talked about all the places a man would get his stuff from. A sponge from the coast. His food from California or Europe. What a man relies on before he even leaves his house is from half the world. And recognizing that and being grateful for people who have worked to get you there.

Before you finish eating breakfast in the morning, you’ve depended on more than half of the world. This is the way our universe is structured, this is its interrelated quality. We aren’t going to have peace on earth until we recognize this basic fact of the interrelated structure of all reality. -Martin Luther King Jr

During our conversation, Kalilla told me that her Poetry Leadership Workshop class does an exercise to ‘light a spark.’ They all have to:
1. Thank everyone. 2. Say something you’re grateful for. 3. Say something you believe in. 4. Say it in a way that your ancestors would be proud of.

I’d like to think that in our big interconnected web of a world, Kalilla’s ancestors are somewhere, looking down at her and they are, indeed, very proud.