You might call Don Lippi, the SJND men’s basketball coach, something of a legend. Earlier this year, Coach Lippi received the great and unique distinction of having won his 900th high school game as head coach. He’s the first coach in Northern California to have achieved this, and one of just four in the entire state.

But, he might tell you that none of that mattered.

Coach Lippi had an important message for the class of 2021 on graduation day, valuable lessons his adopted father passed on to him — not in words, but by actions.

“Do more than is expected. Oh, I got it done. Could you have done something else that would help you with the job? We need to do more than expected to be successful,” he declared. 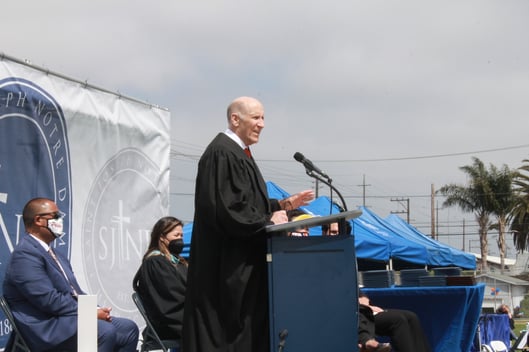 Coach Lippi, at the 2021 graduation ceremony,

One example he gave was his father, who picked up extra work on the weekends. Who hauled in not only his own garbage can after pickup day, but those of all his neighbors, too. Another anecdote he shared was of a former student, now based in Washington D.C. and the vice president of a bank.

Together, Lippi and the former student, on the anniversary of George Floyd’s murder, hosted a town hall at a school where Lippi was formerly a teacher, and the bank president, his student. The town hall drew over 2,000 alumni, and now that school has a social justice director and offers classes on the subject.

“Did he [his former student] have to do that? No,” Lippi said. “He did more than was expected. Now you talk about wins; 900 wins, that just means I’m old. Those wins are nothing compared to that win. That’s a win. That’s going to live forever.”

The other two things he advised to the class of 2021? Persistence and compassion.

“Be generous and kind to those who are poor,” he said, adding that he knew many parents in the community who were out leading bible studies and serving people experiencing homelessness. He encouraged the students to step outside their comfort zone, recalling walks to Saint Anthony’s and around BART where unhoused people often congregated. Take the time to volunteer, eat lunch with them, and Lippi said they would make an important discovery.

“They’re not bad people. They’re people who do bad things. There’s reasons for that.” He spoke of his own time serving as a “big brother” through a non-profit program, affirming that the time we invest into others is time well spent.

Coach Lippi finished by imploring the graduates to persevere and persist.

In a society that celebrates and demands instant self-gratification, Coach Lippi’s words remind us that sometimes, the greatest reward comes when we look beyond ourselves.