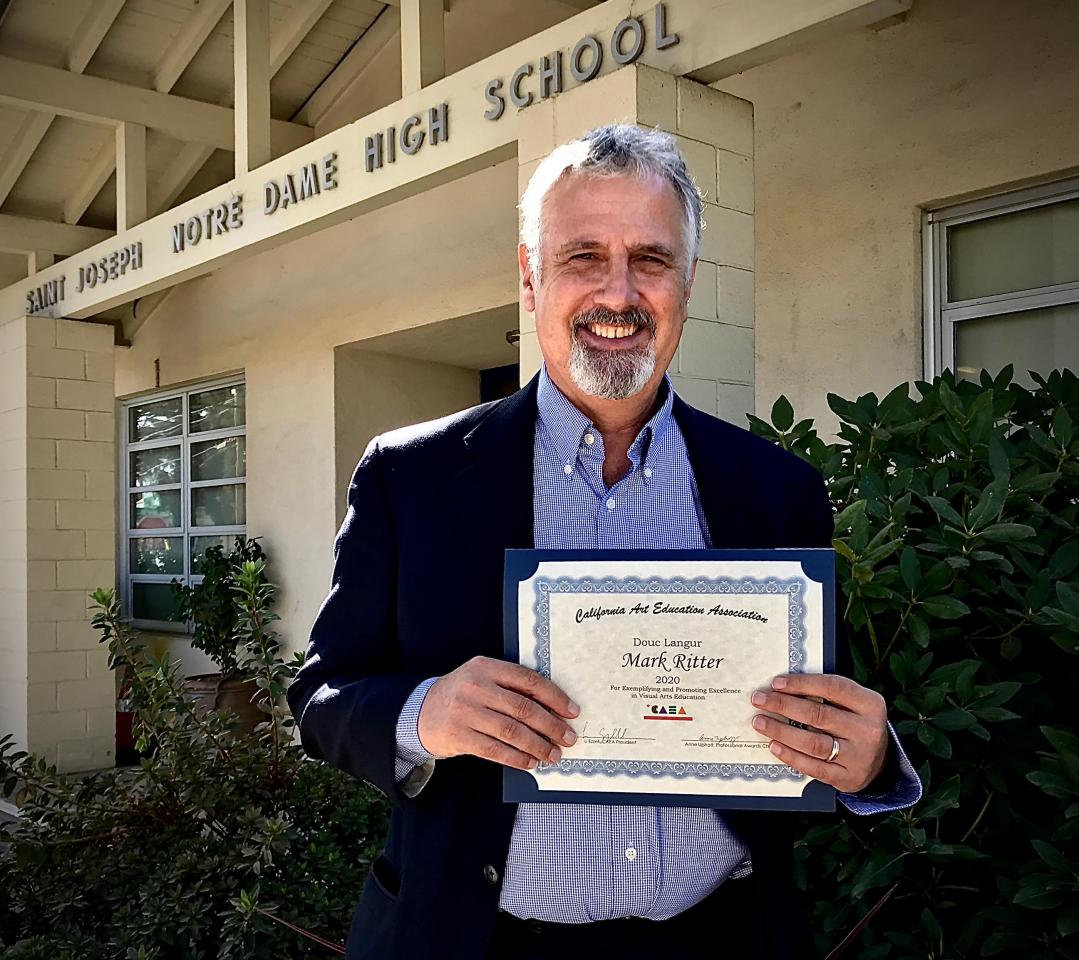 You could say that Mark Ritter is a cornerstone of the arts at Saint Joseph Notre Dame, thirty of his thirty-one years of teaching has been at SJND. Over the years, Mr. Ritter has contributed to the arts at SJND, which has seen tremendous growth in developing different programs so that students can express themselves. He has taught and encouraged both artists and teachers by presenting on different types of techniques for his peers and inspiring artist. Holding workshops all over the country stretching as far as Boston. Providing seminars on topics such as; Float: Simple Methods to Advance Skills, Confidence and Exploration with Watercolor and Oil Pastel and Steps to Success in the Visual and Performing Arts. 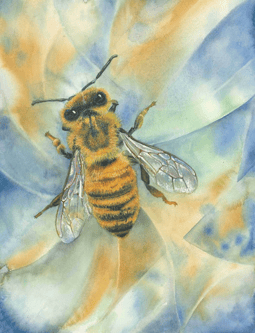 Mark contributes his success to the arts and the greater SJND community. In 1989 SJND only offered Art and Drama as part of their curriculum. Over the years the art program has expanded to include Band, Musical Theater, Choir, and has developed the Visual Arts to include Photography and the Digital Arts.

That creativity can be seen in the hallways at SJND, located in the Main Office and San Jose Halls; you will find award-winning art from contests held on the National, Congressional District, and local level. Or in the Blue Dot Cafe, where Mr. Ritter has fostered a relationship with the owners to expose the local community to the artwork at SJND–creating a gallery space two months out of the year at the local cafe. 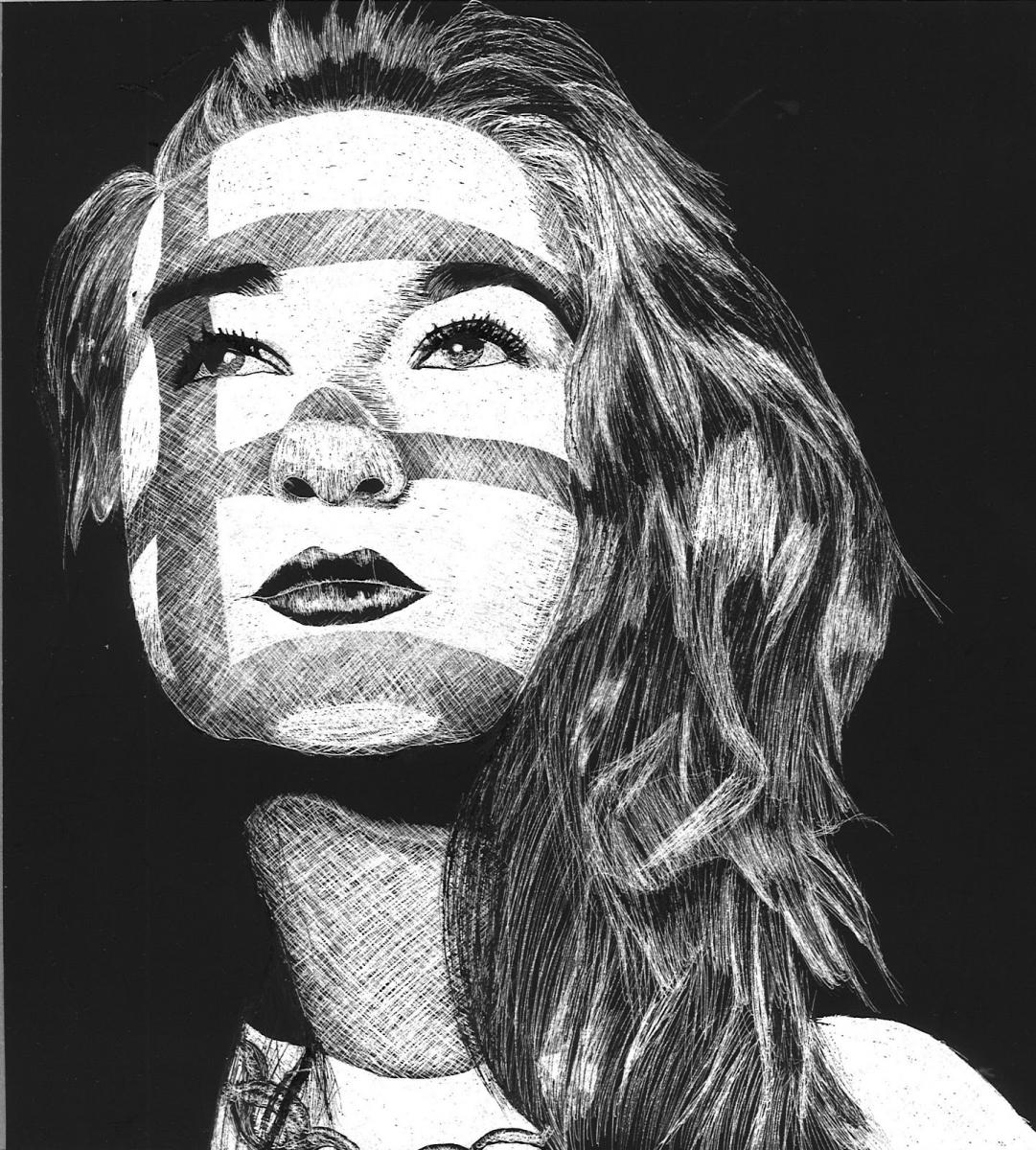 Mr. Ritter doesn’t stop there; he has over twenty years as a council member with the Lillian Black Children Art Council (LBCAC). The LBCAC is rooted in the community. Its mission is to promote visual and performing arts curriculum in the Catholic Schools of the Diocese of Oakland, initiate arts events, and provide grant and scholarship opportunities to foster and support the arts. The Council seeks to address the students’ needs for self-expression, communication, discipline, and critical thinking, and teachers’ needs to integrate the arts as part of the regular curriculum.

In 1994 Mr. Ritter developed and initiated The Traveling Art Show in cooperation with the Oakland Diocese school department with the support of the LBCAC–becoming an annual event. Circulating artwork and artist statements from four student artists selected by each of the participating High Schools to many of the Diocesan Elementary Schools. The Traveling Art Show’s work makes an appearance at the LBCAC Festival of the Arts and then continues to tour elementary schools until early Spring. Through this show, high school artists become mentors and inspire young upcoming artists.

Mark Ritter’s journey as an art instructor started with three simple passions, faith, teaching, and art. The care in which he gives his students is as detailed as the artwork that is created. During COVID, he has found several ways to provide that same care by using technology to develop peer-to-peer feedback by creating and monitoring ZOOM breakout rooms and providing one-on-one feedback to students by recording videos allowing him to give feedback on technique to his students. “It is not the same as me in a classroom, feedback is constant because I can interact with the students in a physical space, now I use technology to provide that feedback, which can be a bit slower”, says Mr. Ritter as he reflected on the impact of COVID for teachers and students alike.  He also provided art supplies to students before the start of distance learning. He also created a summer course that helped him acclimate to teaching online before the school year.

Mr. Ritter’s longevity and sustained passion for the arts and SJND are attributed to his motto reflected in the school’s mission; teaching the whole student. “I believe in teaching the whole students, I’m fortunate to work at an institution where my personal beliefs as a teacher are aligned with the mission of the school.” – Mark Ritter, 2020 CAEA Douc Langur Awardee.