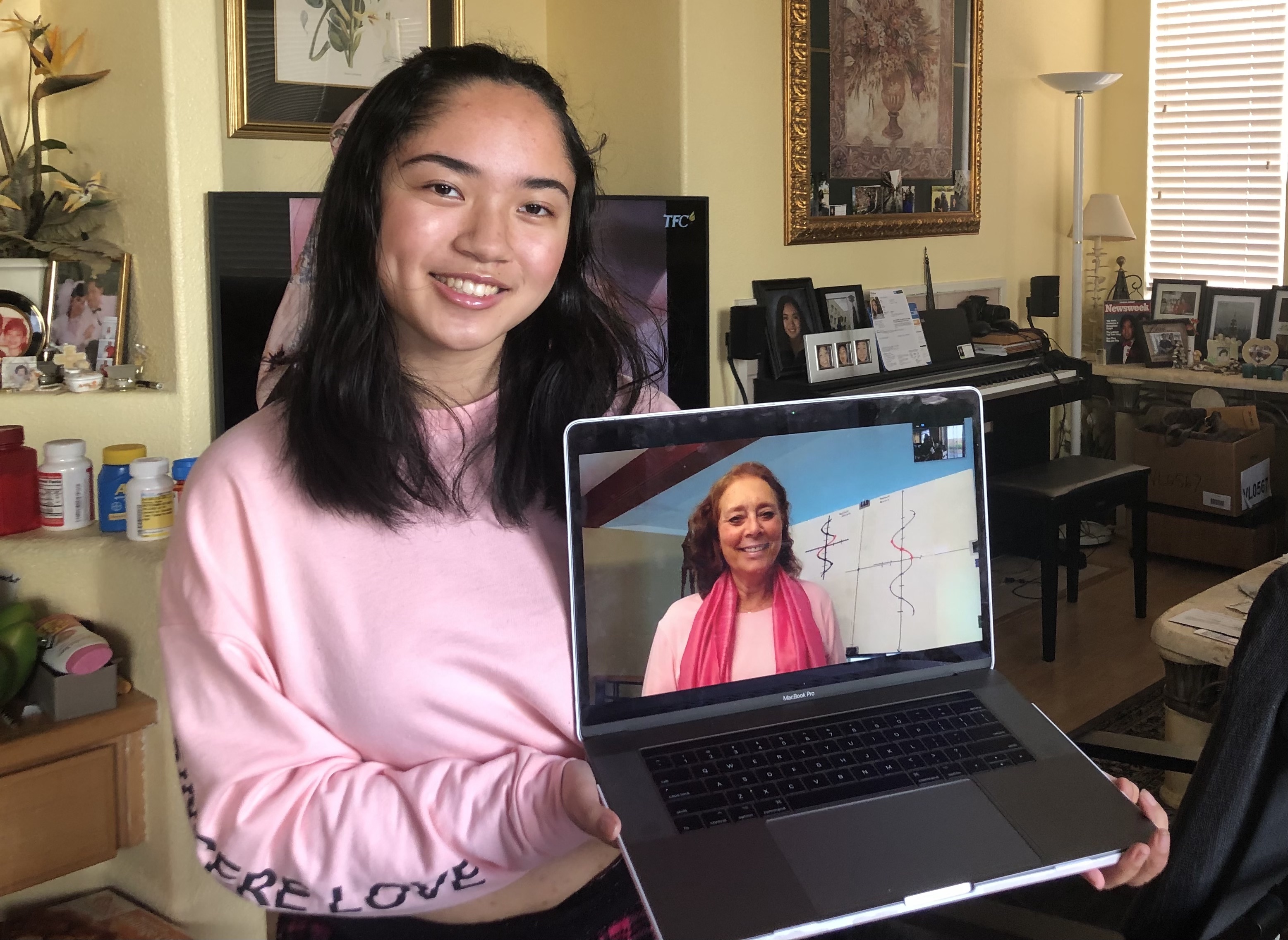 Lisa Ramos, class of 2021, has a penchant for poetry. The inspiration arrives in manners not always conventional, but as we know, ideas sometimes strike in the dead of the night.

“I often write poetry based off things I'm surrounded by,” Lisa shared. “I have one poem that I [wrote] right after I finished watching this Chinese Netflix drama. I was so moved by it that I wrote a poem about it. Another poem I wrote, sitting late at night, thinking about night lights. And I was like, night lights are kind of dangerous and kind of scary to turn on. And another poem I wrote was when I was really angry at a friend. I pushed my emotions into that. It's really an outlet for me to observe my world and try to make some kind of art from it.” 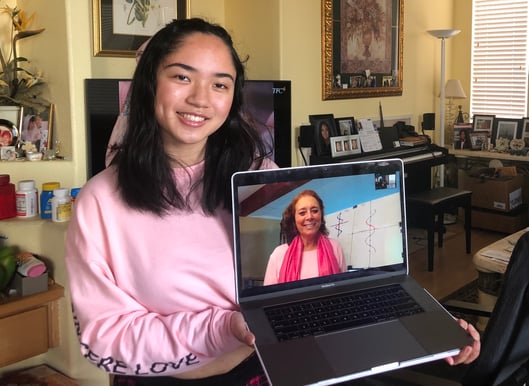 Lisa and her teacher, Ms. Kubicek, dressed up for Spirit Week.

Lisa serves as the editor-in-chief of Prisms, SJND’s award-winning art publication. She oversees a team of editors that work with the club moderators, Andy McKee and Colette Gunn-Graffy, to produce an art anthology created by the high school community. For Lisa, it’s been a rewarding way to discover fellow students’ artistic tendencies.

“One of the best things I like about Prisms is when you get student submissions,” she said. It's mostly gathering a bunch of art, writing, and all of the creative talents of the SJND community. Oftentimes, people don't really have a chance to randomly show up [and say], ‘Hey, look, I did this artwork,’ or, ‘I did this poem.’ So, you see people you may have never known even do that kind of stuff find the confidence to showcase that.”

Throughout the past year, she has led weekly Zoom meetings that allow the editors to continue to produce the publication — though, due to circumstances, she noted they are running behind schedule. But, they’ve found ways to adapt, too. Paper editing (though sometimes preferred) has been replaced with virtual tools. Refractions, an art and poetry event hosted by Prisms, still took place. And, Lisa is still submitting her work, too, though she finds herself more so enjoying editing and producing Prisms. 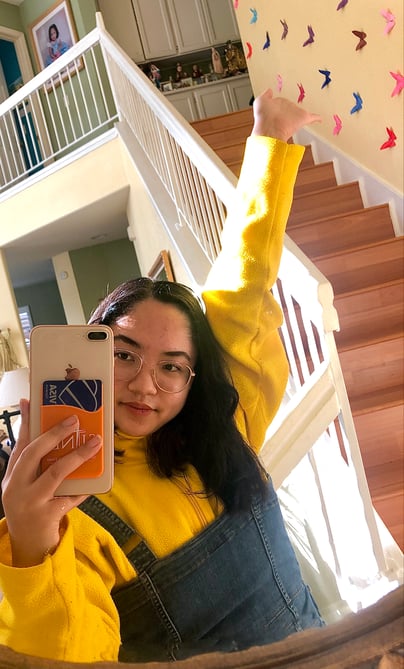 Lisa with the origami butterflies she created.

“Over the years, I started to like editing poems or editing artwork more than making my own,” she said. “I think the whole collaboration between us at Prisms and the student in order to make sure that their artwork or poem shines through is honestly very cool.”

With production running behind schedule, it may bleed into the summer, but Lisa was adamant that though she’s graduating, she would stay on to see the issue’s completion before heading off to start her first year at the University of California Los Angeles, where she plans to study psychobiology.

“I lived in the bay my whole life and I just wanted to be able to have a new environment and see if I'll sink or swim, who knows?” she said about the move. 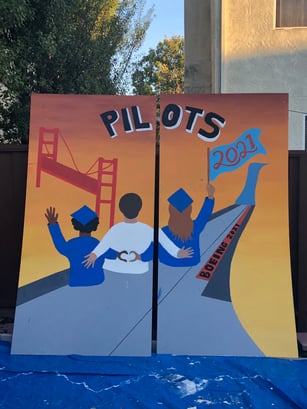 Last year, despite the uncertainty, the initial lockdown came as a sigh of relief. When school moved to distance learning, Lisa and her classmates saw it as a much needed break away from the stress of maintaining their grades for college. The enthusiasm, however, waned as the weeks, then months, dragged on with no certain end.

“I guess as time went on a lot of people's mental health, I think, and I guess mine as well, or just motivation, really went away,” she said. However, she did express gratitude for the understanding and care of the teachers, who seemed to know that times were tough.

“I know teachers are very, very understanding about that,” she said. “They don't mind extending deadlines. They even email or check up [asking], ‘Hey, are you doing okay? Do you need extra time to do your assignment?’ So I think that's also very reassuring to know that some teachers are definitely there for you.” 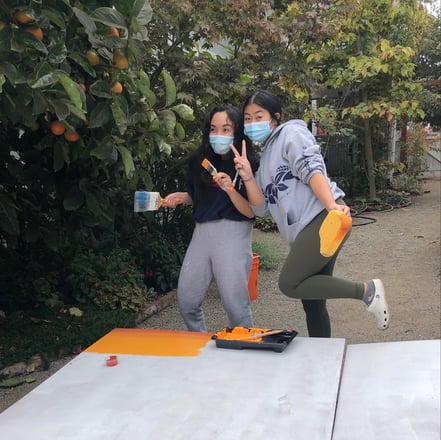 Lisa and a friend work on the class mural.

Now that hybrid learning and more in-person activities are starting to take place, she is relishing the connection that only face-to-face contact provides.

“I loved it,” she said about the Kairos retreat. “We kind of forgot how cool it was to spend time with each other. [At the] beginning of senior year, none of us really felt the motivation to attend any social gatherings. We were tired of it all. But because of hybrid learning, and these things coming back to us, I think a lot of us see this as an opportunity to make the last of the memories that we have in our senior year.”

Despite the year’s unconventionality, it did also offer a time of deep introspection about herself, her priorities, and the world.

“I definitely think the world has changed,” she said. “I feel like we are definitely more socially aware of things. I feel like you're probably more empathetic to other groups of people other [as opposed to just] what do we believe in? And I think things such as ignorance [are] not tolerated anymore”

Warmth of a Nightlight

My mother kissed my forehead,

Closed the door and whispered “goodnight,”

But only after she turned on my favorite nightlight.

Engulfing my bedroom walls in a rose-colored hue, Immersed in an artificial warmth that calmed and soothed. Now, the dreams emerged and the coast was clear,

As restlessness and anxiety fled in terror,

All thanks to my nightlight, my one true savior.

It was in the middle of the night;

I was taken away from some dream I couldn’t quite place,

Feeling groggy, my mind spun in a daze.

My bleary eyes opened to find comfort in walls painted with blush, But to my horror, I was blinded instead

With a blazing orange, incandescent yellow, and fiery red.

My entire world was ignited, falling into pieces—a fire.

A few days later, I woke up in complete darkness.

The news: my apartment was in ashes,

The cause was my beloved nightlight,

And the one who embodied actual warmth—she didn’t make it out alive. I’m now a lost child,

With no nightlight to guide me along the way, With no mother, lost in fumes of charcoal gray.

And she’ll watch over me within the bright, illuminating stars. But for now, I’m left behind with the cold darkness in my heart.