Rebecca Rochlin, ‘17, knew from the time she was 13 that she wanted to become a doctor.

“My mom had an episode with a brain injury,” she recalled. “I had no idea what was happening but she had brain surgeries that saved her life. I was inspired by the doctors and the nurses that took care of her.”

The UC Berkeley graduate and Bay Area native enrolled at SJND from a large public school. Being in the biomed program gave her a tight-knit community and chance to explore the medical field.

“I think I thrived a lot in that environment,” Rebecca said. “I was lucky that I knew exactly what I wanted to do before even getting to high school. But I think that even if you're at all interested in learning about the human body, and learning about how doctors and other medical professionals have to think when they're in this field, I think it's just a really cool program that we're very lucky to have.” 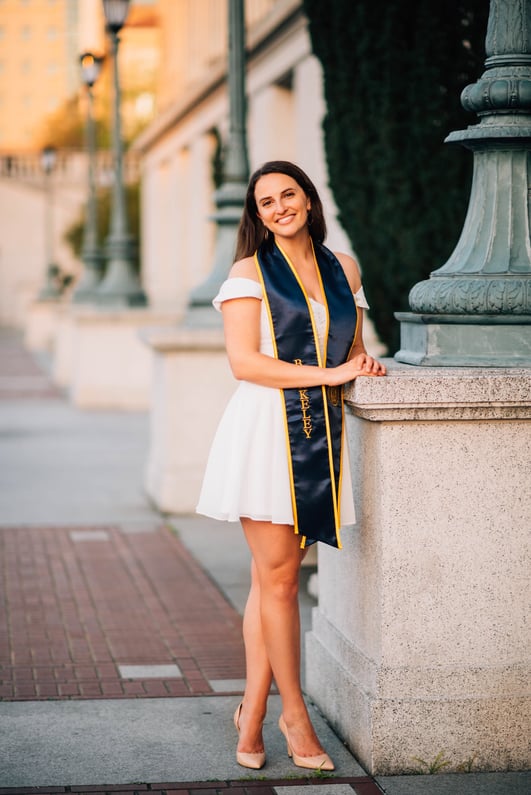 The biomed program also provided the opportunity for Rebecca to investigate topics that interested her and dive deeper into the subjects she cared about.

“This is a fun way to really explore whether or not you like science and whether or not a certain subject really interests you and you're able to explore that on your own,” she shared. “Obviously, we can't get into detail with everything, but in human body systems when we were learning about the nervous system, I used that as a time as an excuse to just Google stuff on my own and ask my teachers is really random, obscure questions that they probably were like, ‘what the heck,’ and I was like, ‘I'm just so curious.’”

At Cal, Rebecca pursued a degree in molecular and cell biology with an emphasis on neurobiology. Her spare time was filled with work at UCSF and volunteer hours with Alzheimer’s patients at a local hospital near campus. At UCSF, she worked in the memory and ageing center, which served patients with rapidly progressive dementias.

“There's no cure for them,” she said. “It was a very humbling experience. It wasn't the happiest work, but it's important work and not much is being done outside of UCSF. I did that for a year and that was very rewarding. I really enjoyed it.”

After graduating, Rebecca had plans to enroll in medical school, but the pandemic forced a gap year. She’s now in Cleveland, Ohio, at the Cleveland Clinic in the MOST Program (medical observation and scribe training program), where she works as a scribe in the neurosurgery department.

“I get to see a lot of the doctor-patient interaction; I get to shadow them and see the ins and outs of being a doctor, which is really great,” she said.

As she begins her gap year (as of this interview, she’d just moved two weeks prior), Rebecca is keeping her eyes on her end goal: making a difference in the lives of people like her mom.

“It all goes back to my mom,” she said. “I love the brain; it's so mysterious. There's so much we still don't know about it and so much to be cured and hopefully treated in the future. I think it would be really exceptional to be a part of that group that can hopefully change something.”