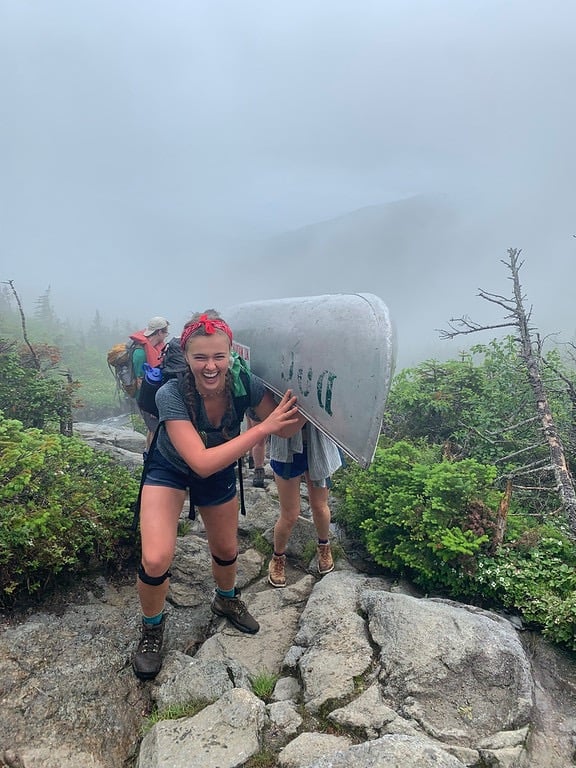 When she was younger, Emily thought she would become a veterinarian. This led the 2017 SJND valedictorian and now 2021 Dartmouth College valedictorian to enroll in the biomed program. She quickly discovered that she didn’t enjoy dissections very much, but that the social justice conversations happening in her humanities classes were intriguing.

“I loved biomed; I loved the learning structure of it and the independence and being in the cohort was a blast,” Emily remembered. “All my friends were in it and getting to work with them on creative projects was amazing. But I ultimately found social science had a little more that I could sink my teeth into, or that pulled my heart.” 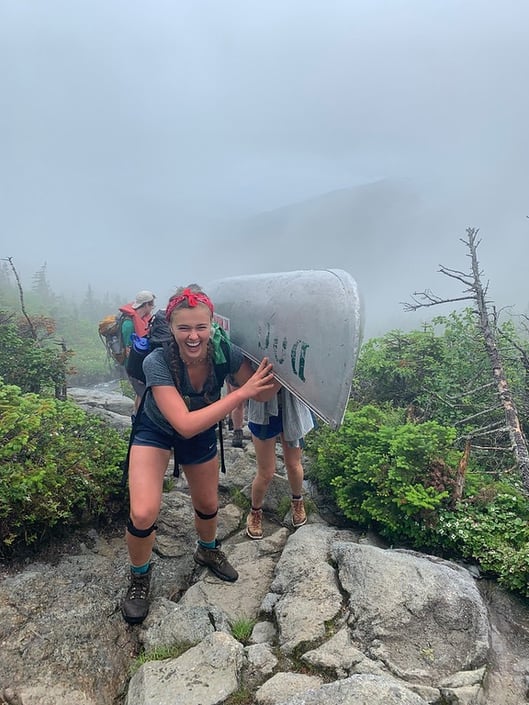 Emily participated in the tradition known as the "Portage," where students carry a canoe up Mt. Washington in New Hampshire. It is the tallest mountain in the Northeast. Students paddle in the Lake of the Clouds at the top.

Emily has fond childhood memories of the outdoors growing up in the San Francisco Bay Area. She recalls lazy summers swimming at the lake and picnicking with her grandparents. However, when she joined the outdoors club at Dartmouth College in New Hampshire, she found that the outdoor idyll as she had known it was replaced with a privileged culture of intense ruggedness.

“I think that it's really easy to get affected by that and feel cool and badass because there is a dimension of being outside and being able to push your body and your mind,” she said. “Then I was facing this tension between the outside that I knew and the outside that was being presented to me. And then noticing that outside was also tinged by a lot of class and race dynamics in terms of how particular folks are used to being outside and relating to land was sort of frowned upon.”

Instead of allowing herself to get wrapped up in something that didn’t feel true to her, Emily made the experience exactly what she wanted it to be. 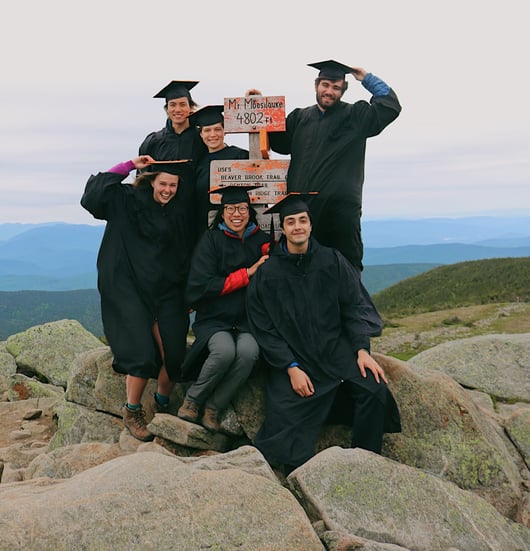 Emily (left) smiles for graduation photos with friends at the top of Mt. Moosilauke.

“It was this tension of navigating my own experience and enjoying pushing myself. But also returning to a more deliberate appreciation of just spending time outside.”

As a member of the outdoor outing club, Emily, who majored in sociology and double minored in Native American studies and education, took the opportunity to organize educational initiatives.

“[The club] wanted to train more outdoors people. I'm like, ‘What does that even mean?’ Then there are folks like me and my friends who saw the merit of mastering skills, and I wanted to create an environment in which people could engage at whatever level they wanted,” she said.

Emily ended up planning a workshop on the outdoors with regard to gender, which led to policy changes in how club leaders were trained to respond to different issues. Other workshops followed, including policy discussions, guest speakers, and open mics where club members were able to share their experiences of race, class, and gender oppression.

“It was a really fun exercise in pushing for inclusivity in organizations that are traditionally exclusive, and in conflict resolution — or at least sitting with conflict and finding some way to compromise,” she recalled.

The thing she is most proud of, though, is the land acknowledgement extended to the Abenaki people, who are the indigineous group that live on the land Dartmouth now occupies. A teach-in event allowed the community to learn about the Abenaki’s history and culture. 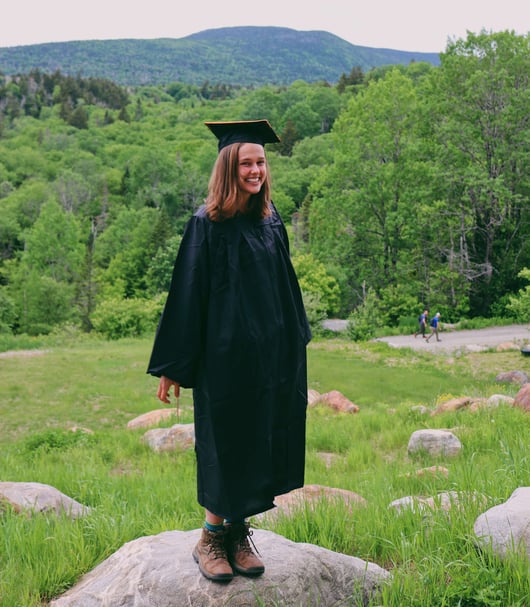 With her clear passion and love for teaching — Emily also volunteered at an outdoors after-school program in New Hampshire’s Upper Valley — she plans on entering the education field after a gap year in Ecuador.

“I view teaching as my skill or my passion that I have to offer to the greater cause of social justice,” Emily said, noting that while she had been to protests, it had always felt a little awkward and not true to her personality.

“I think it's fun to be creative, prompting conversation. I think it helps build relationships between people to hold a classroom setting where you're talking about vulnerable things, giving them the space to talk about things that might not come up in the dining hall or at a party. But really, it was like, okay, we are complicit in centuries of trauma in and harm both in the outdoors industry and in the context of this school, which is deeply problematic and built by slaves and rest on indigenous land. That seems really overwhelming, but I have this one thing that I know how to do. I'm going to try to do it for these people. So it was a little small chipping away at an irreparably messed up system.”